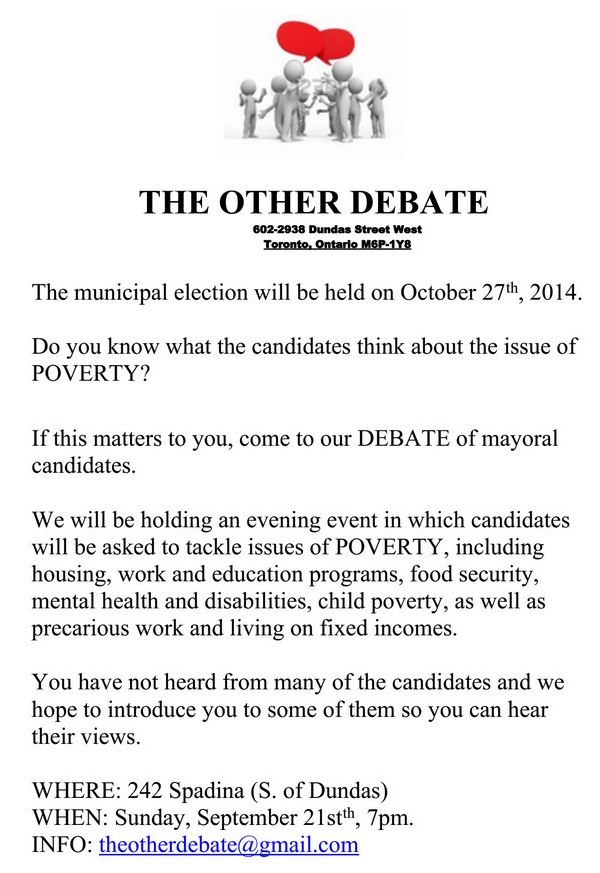 We are a group of concerned citizens holding a mayoral debate on issues of poverty and we would like you to be our guests of honour.

We will be holding an evening event in which candidates will be asked to tackle issues of POVERTY, including housing, work and education programs, food security, mental health and disabilities, child poverty, as well as precarious work and living on fixed incomes.

You are cordially invited to our evening event which will take place this Sunday in Chinatown.

THE OTHER DEBATE – Event Program

Different individuals asking each one question on the following:

Each candidate will be given about 2-4 minutes on each question.

We expect to get all this done in about an hour, but then the audience will be invited to stay and meet the candidates. There will be coffee and an open bar and possibly also kitchen.

We will be contacting poverty advocates, people living in poverty and other interested friends and supporters.

David Meagher on behalf of
The Other Debate

Photos and Video From 'the Other Mayoral Debate' https://t.co/DxHLkDxuno #Topoli