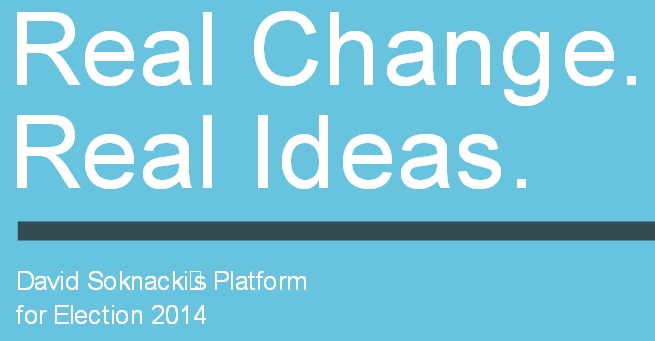 If you were going to vote for Soknacki, don’t panic. You can still vote for Syed. (Actually you can anyway.) cc:@HiMYSYeD #topoli

Thank You @DavidSoknacki for Wishing Me The Best of Luck; Your Campaign of Ideas Does Not End Today | #voteTO #TOpoli pic.twitter.com/TLK8PoZT8K

My “Transit Prime Directive:” we should never rewrite transit plans that are already paid for, designed, and engineered.

We can make better use of the transit capacity we have for immediate transit relief.

Many critics have complained that I don’t have a transit map like other candidates. That’s because it’s not a politician’s job to draw transit routes on a map; we pay professional planners and transit engineers to do that for us.

This map – published by Metrolinx – shows the transit routes planned and in place as of September, 2013 – before politicians like Mayor Ford and John Tory began to redraw those plans to suit their own personal political interests. Not seen: the potential routes for a Commuter Relief Line that would cut transit congestion on the Yonge and Bloor-Danforth Corridors.

If you feel I need a transit map, this is it. 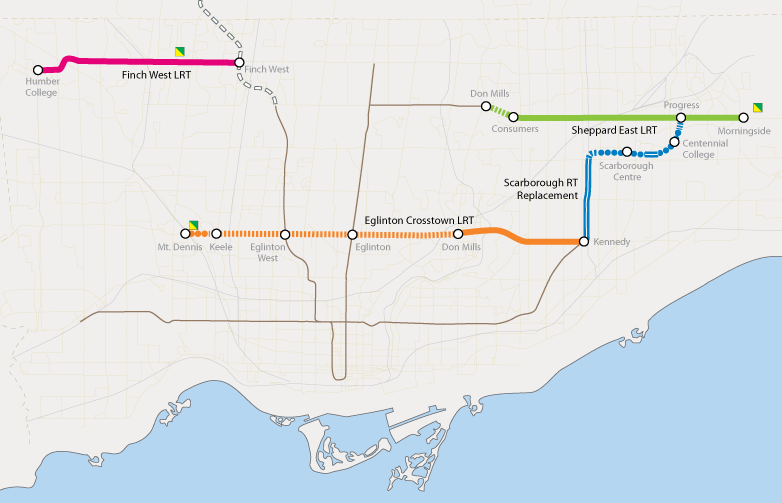 To make more room for car through-traffic, safe cycle lanes and onstreet transit, I would phase out street parking in the downtown core – between Bathurst, Bloor, Jarvis and Front – on major streets only, over 2016-2018.

We can offset some of the lost parking downtown with partnerships to build multi-floor parking on up to eight surface Green P lots downtown.

We need more separated lanes to make biking safer for riders and drivers alike. I will double the bike lane budget to build up to 200km of new, commuter-grade bike lanes. I will speed up lane expansion by frontloading environmental assessments. I will expand bike parking in condo towers (through zoning policy) and along key bike routes.

I support the investment of $3m annually for safety fixes at bike/car accident hotspots.

I will hire a construction industry veteran into the Mayor’s Office to offer expert, independent policy advice to the Mayor and Council on pricing, cost controls and innovation for the City’s multibillion dollar infrastructure budget.

I support plans to relocate the Gardiner East as this will maximize use of land and minimize disruption. We need to expand the Redway Avenue to reduce traffic risk in Leaside, and I support the use of temporary tolls for optional single-passenger car traffic on the existing bus and HOV lanes on the Don Valley Parkway to fund extension of one complete HOV lane along the entire Parkway.

“Save to Invest” – Our Budget Projections

Note: Toronto’s debt is scheduled to begin dropping in 2019 without the Scarborough Subway – so these investments will stabilize rather than increase debt over time.

Some planned savings measures include:

New revenue: giving tax breaks for vacant commercial properties – as Toronto must by provincial law – gives property owners an incentive to drive up rents. Vacant properties also cost cities more in services over time. If Queen’s Park doesn’t lift this requirement on request, I will use powers in the City of Toronto Act to seek a new vacant property frontage levy on vacant streetfront properties of all types to recover $20m.

We’ve done little to change the way we police Toronto in decades, even as community needs, technologies and policing methods across the continent have changed around us.

Crime rates are declining across North America – and right here in Toronto. The Toronto Police Service budget has grown out of control, and the next police contract expires shortly after Election Day. With a new chief on the way, it is the time to step in with some financial restraint – without cutting frontline officers.

I will sit on the Police Board. I will save over $65m by:

It’s time to end paid duty. I support the creation of a public, security-level unit trained and led by the Toronto Police Service – in line with the cadet or security programs in other Canadian cities – to handle construction sites, TCHC security and TTC patrols.

We can also improve the accountability of policing by acting on new police board policies to limit police stops (“carding”). I also support the mandatory use of lapel cameras for officers on duty, given their success in other cities.

Building the City We Want

Housing is a crisis in Toronto:

Parks are the heart of our City, yet Toronto has less park space per capita than many similar cities around the world.

Arts and library Programs are critical to the cultural life of our city.

Innovation and the Economy

I will set aside funding in the budget for a Mayor’s Office Innovation Unit to survey City Hall for opportunities to improve services with better technology.

Technology startups can bring new thinking to city services. Partnering with startups can help to build Toronto’s tech industry. I will launch Innov8TO – an annual competition – to partner up to eight startups directly with City departments and agencies every year.

We should make Toronto the easiest place to start a new business in Canada. I will ask Council to let new companies defer license fees until the end of their first year so they can earn money to pay those fees, with online business license registration and renewal.

“Open data” is the process of releasing public (not private) data held by the government to help businesses plan and design products. Releasing open data can also help to keep City Hall accountable for spending and outcomes. By 2018, if I’m elected, Toronto will release more open data than any other city in the world, and I will enforce that goal by writing goals into managers’ contracts for each department.

The food truck by-law limits food trucks, when we should be more flexible. I will ask Council to rewrite the rules so these “restaurant incubators” can serve us more freely.

I oppose highest-and-best-use taxation on our storefront streetscapes, and will take aggressive action to end tax breaks for vacant commercial properties which artificially increase commercial rents (see below). I led the implementation of gradual business tax rate reductions in 2005, and I will extend those rate reductions past 2015 until we are competitive with other GTA cities.

We can promote Toronto’s economy more effectively if we work within and sell ourselves as part of a larger, regional economy. To foster regional economic development, I will sign municipal trade deals with Greater Toronto Area partners to harmonize business processes and recognize licenses across borders.

End the Circus at City Hall

Council’s most powerful committee is the Executive Committee – and entire regions of the city are often left off the Committee. I will change City rules to guarantee that one Councillor from each region (elected by regional colleagues) will always be on the Exec.

I will invest $500,000 annually in an inspector-general model for City accountability officers to offer better coordination and more investigative support.

I built my own food manufacturing business. I have committed to separate my business interests by acting only as a shareholder if elected Mayor, so there will be no “Deco White House” in my term of office.

Our voting system rewards wedge issue politics, negative campaigning and divide-and-conquer thinking. I will lobby in favor of a ranked ballot elections so that you can vote for the candidates you want, instead of having to vote against the candidates you dislike.

I support ward redistribution so that Council will have 44 wards, but based on newer, fairer boundaries. If we do not do do this, there will be unfair disparities between wards, or we’ll have to increase City Council to 51 to distribute new wards evenly, at a higher cost.

I’ve promised that the Mayor or Deputy Mayor must be within the GTA at all times to preserve emergency authority for any disaster, and will propose rules to make this law.

By the time you read this, I’ll have voluntarily released information on my campaign donor list in advance of Election Day – a historic step for transparency. I challenge other candidates to follow suit.

One of the most shameful legacies of the Ford era is the habitual marginalization of many in our diverse community. Since my schedule will be published regularly, the public will be able to measure my commitment to work directly and regularly with the LGBTQ community and other Torontonians who have been treated as outsiders in their own city.

Despite many years of controversy and change, Toronto’s waterfront is still one of our City’s most treasured assets. I would push Ottawa to agree to bring the Toronto Port Authority under the complete control of Waterfront Toronto, and reorganize it accordingly. This outcome is important enough to consider offering concessions to the federal government to achieve it.

I would oppose any Island airport expansion for jets unless the Toronto Port Authority can guarantee compliance with existing noise and environmental regulations. Onshore City of Toronto infrastructure costs related to the expansion must be paid for by the Authority.

Toronto is now dense enough that every public space is premium space. It’s time to radically rethink the relationship between schools, school space, public space and the city at large so that City Hall can play a constructive role in making sure that outdoor and indoor community space is always available for community use. I would ask Council for a mandate to begin a long-term conversation with Queen’s Park and the TDSB to see if there’s a better way for the City and the School Board to cooperate in the use of school buildings and school fields.

One of our volunteers made up an election sign for their garden #topoli pic.twitter.com/UKeQCFreDr

RT @DavidSoknacki One of our volunteers made up an election sign for their garden #topoli | pic.twitter.com/iKCU4kC5L8 | http://t.co/03PoHd7Gcl