Totally unfair!! .@HiMYSYeD waited for most of the debate and John Tory just ended it without even giving him a chance to speak. #voteTO

… Himy Syed, also a candidate for mayor, sat patiently beside the others but wasn’t invited to speak – possibly proving even a debate on fairness can’t be fair to all.

“People within this city have realized they can create their own institutions,” and the city must do business with them and hire from among them, he said.

“This year’s mayoral debates … look like Toronto of the past, Syed added.

“It is the council debates (in the wards) that are more reflective of the city we are becoming.” 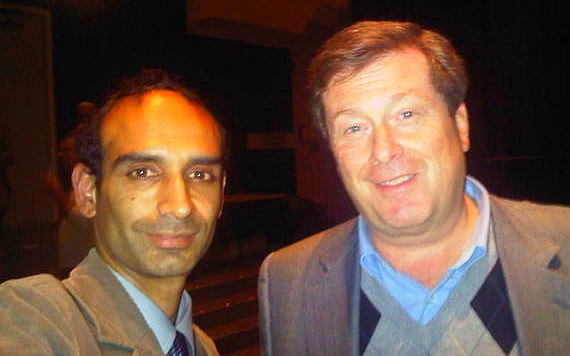 #TOVotes #voteTO: On condition it’s understood John Tory is not endorsing me, we snap this. http://twitpic.com/2oiudw

RT @hellokaitlin So, there goes #JohnTory taking wind out of #KarenStintz's sails. If TTC or the mayoral race had sails, that is. // #voteTO

#JohnTory has signed his Nomination Papers as Candidate of Mayor of #Toronto 2014. #voteTO #TOpoli http://t.co/C15c4kFyNK

A man called Tory what we were all thinking and @HiMYSYeD caught it on video: https://t.co/y2SDGfo0RG #topoli

@johntoryTO not showing up to the @ttcriders debate proves what I expected: He's already bored of the job he doesn't even have yet. #TOpoli

Exactly: @johntoryTO : "I've had the privilege…"

@sol_chrom With a month left, people start paying attention – the narrative of "out of touch" is already with Tory – those gaffes don't help

In a scrum, John Tory was asked if he believes white privilege exists. "No I don't know that it does," he said.

@BenSpurr we have you in a shot kinda laughing when I asked that question.

@nyounglai yes. Relevant given the context and content of the debate.

@HiMYSYeD Agree/disagree with that voter's stance, but more people should be as politically engaged as he is. #CityVote #TOPoli

@HiMYSYeD So I guess this does prove a selfie does not equal a vote…unless under that t-shit is a Tory Tat. #TOpoli