“But that isn’t stopping Hap Charlton, the dynamic (some would say bombastic) candidate who is taking the city by storm.

“And as usual with Hap, he’s doing things his own way.

“Hap is a big man with big ambitions for the city he loves. A beat cop who worked his way to the top and for a decade now has run the largest police force in Canada.

“But he hasn’t forgotten his humble roots, his commitment to community, or his lifelong passion for rugby. That’s why every year he still volunteers as a coach at one of the toughest high schools in Scarborough, the suburb that he grew up in and still calls home. 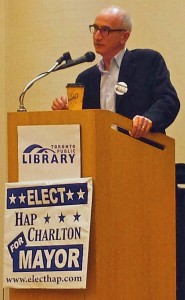 “Hap’s a hands on guy. He insists on licking his own stamps, driving his own car, and keeping his fingers on the pulse of everything that’s happening in his city.

“His slogan: “Take Back Our City!” says it all. He’s going to fight crime, cut the bureaucracy, and make Toronto great.

“Most of all, he’s determined to win. But will he?