“City of Toronto managers descended on the park just after 9 a.m. to clear away trash leftover from a weekend festival and illegal dumping that started after city workers walked off the job early Monday.

“The growing piles sparked protest by local residents just hours into the strike and has led to a growing petition urging the city not to use parks as temporary garbage dump sites as the labour disruption continues.

“Himy Syed, a concerned resident who started promoting the petition, said he received an e-mail from local city Coun. Joe Pantalone promising the church group that left the bulk of the garbage after their event Sunday would be fined for not meeting their obligations.

“City officials cleaning up the garbage said they couldn’t clear the trash until bylaw officers went through it to find any evidence of who dumped it illegally.”

“While the city has yet to announce the location for its new temporary dump sites, residents see temporary fencing being set up and figure the park is about to get filled with garbage.

“Friends of Christie Pits say the decision stinks, especially after watching the 2002 strike ruin the park with piles of garbage from the 16-day city strike. 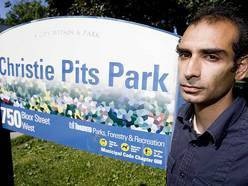 “Group member Himy Syed started a petition earlier this week to urge city council that parks should not be used as dumps.

“That petition garnered hundreds of signatures and received support from residents living around other parks in the city.

“Now the group is livid that, despite assurances to the contrary from local Councillor Joe Pantalone’s staff, they’ll have to contend with piles of the stinky stuff.

“Earlier this week in an e-mail to the group, Pantalone’s staff assured them the park was not a dump.

“Christie Pits, nor any park, will not be used as a garbage dump,” the e-mail stated. “Thank you for taking the time to write and for all the work you, and the friends do, with Christie Pits.”