I was sitting beside Doug Ford inside The Clamshell, he tells me, ‘I haven’t been down here in 10 years.’ #TOCouncil #TOVotes #voteto

@reporterdonpeat …says Doug Ford, who literally showed up hours before the deadline and said he's running for mayor. #TOpoli

Ford: all mayor's have served on council…you think u can just show up…you've always had everything handed to you on a silver platter."

FACT: Toronto HAS Elected Mayors who never served on Council. 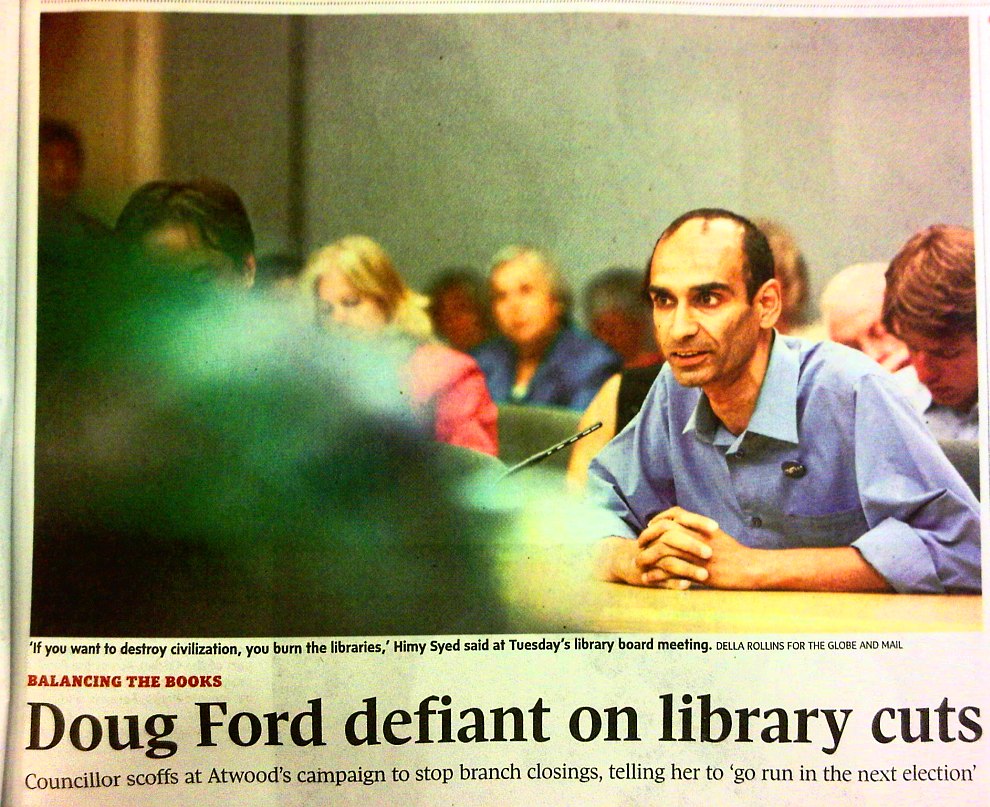 Why is there more #TOcouncil Security around Doug than Rob? Because if anything happens to Doug… Rob becomes Mayor. #TOpoli — HïMY SYeD (@HiMYSYeD) May 17, 2011

“…The press generally cites Doug’s opinions as though they are official pronouncements from the mayor’s office, and refers to the administration casually as “The Fords.”

“He’s the shadow mayor, there’s no doubt about it,” says Councillor Janet Davis, who has been among the Fords’ most vocal critics.

“It’s quite striking, really, that Doug has assumed the role of mayor so easily, and people have now come to accept that he has some greater authority around here.”

“Political gadfly (and former mayoral candidate) Himy Syed recently joked on Twitter that Doug Ford needs more security protection than Rob since, if anything were to happen to Doug, Rob would become mayor.”

See what Doug just did there? IF #RobFord can’t run for re-election as Mayor, Doug Ford essentially said HE’d run for Mayor instead! #TOpoli

There it is: #TOcouncil lor Doug Ford NOT championing a school food program in HIS own Ward 2 which he “Represents”. #topoli p.s. WTF. — HïMY SYeD (@HiMYSYeD) December 2, 2013

@HiMYSYeD on some possible new revenue tools. The greatest list in the history of Toronto! #BudgComm

@HiMYSYeD: we should advocate for the surrounding municipalities to adopt the LTT. Level playing field. #BudgComm — Sol Chrom (@sol_chrom) December 3, 2013

@shelleycarroll asks about the rationale for some of @HiMYSYeD‘s suggestions. Alleviate pain of cutting nutrition programs. #BudgComm

@HiMYSYeD gets some props from Doug Ford for being “the first person to come in here with solutions instead of their hand out.” #BudgComm — Sol Chrom (@sol_chrom) December 3, 2013

@HiMYSYeD: “Actually, there were others, but you were out of the room.” #snap #TOpoli #thatsgonnaleaveamark

RT @sol_chrom Now up: @HiMYSYeD at #BudgComm. // Sol, thank you for live-tweeting points from my deputation earlier. Appreciated! #topoli

@shelleycarroll Yes you did. & you’re welcome. If there is No Record, There is No History. Mr Doug Ford has a long… Record.

‘No Taxation without Representation’? Doug Ford’s 10 years of living in Chicagoland before his time on #TOcouncil is showing… #TOpoli — HïMY SYeD (@HiMYSYeD) January 29, 2014

@JohnFurrToronto When boarding @TOpoliElevator, schoolkids kept asking if they could see “Doug Ford”. They were excited about DOUG!? #topoli — HïMY SYeD (@HiMYSYeD) January 30, 2014

Neither #RobFord nor #TOcouncil lor #DougFord inside Chamber at present. Get used to this Toronto, Come December 2 2014, it will be the norm

Chin Lee says Doug Ford "loves" Chicago. "Why don't you become the mayor of Chicago? Rather than being the mayor of Toronto."

Can @oliviachow and @johntoryTO just call out Ford on his outright lies. Clearly and directly. I'm beyond sick of hearing them. #TOpoli